Warts are unsightly and often painful. No one wants warts. Caused by a virus, warts, once embedded, draw from your blood supply and begin to grow and proliferate. Large warts or clusters of warts on the bottom of the foot (often referred to as plantar warts) can really become a serious problem and make walking or playing sports painful. 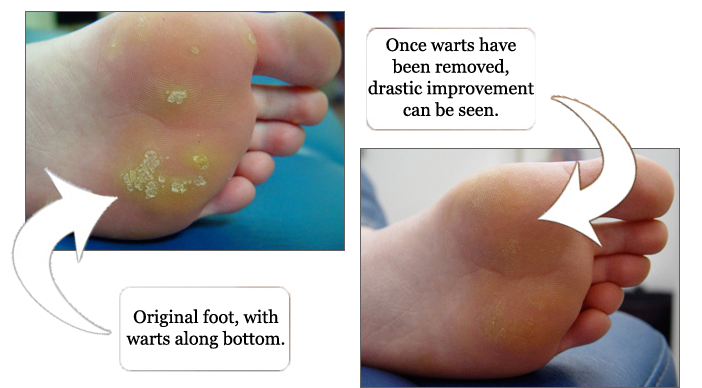 Getting Rid of Foot Warts

Unfortunately, until recently at least, getting rid of warts has almost always proven a challenge. Plantar warts are tenacious and can be terribly difficult to eradicate. They are resistant to nearly every treatment you throw at them, whether it medication or repeated applications of acid or freezing compounds followed by scraping, cutting, digging …

And still, all too often, they just come back anyhow, and they continue to spread and grow. Some patients, with especially bad cases of warts, come to believe there is no solution, because nothing ever really works, even after months or years. That used to be the case, anyhow.
An exciting new piece of technology — in a very specific form — has made destroying warts surprisingly simple. This new treatment involves the use of a high-powered laser. But not just any laser. In order to effectively knock out warts and destroy them for good, it requires a specific kind of laser, and it has to pack a heck of a punch. More specifically, the laser needs to be able to destroy the virus while at the same time cutting off its blood supply.

One particular laser does the job quite well: the Nd:YAG.

It is a long-pulse laser, with a few very specific traits enabling it to destroy warts in only one or two short treatments. The combination of these traits makes the procedure effective, and they are described easily enough.

First, the proper Nd:YAG laser for wart treatments will make use of the 1064nm wavelength. This particular wavelength ignores skin pigment (also called melanin), making it safe on all skin types and allowing it to penetrate the skin and pass on to where, in the case of treating warts, you want the energy to build: at the blood supply feeding the virus. This 1064nm wavelength targets hemoglobin and essentially uses the blood supply beneath the skin, at the base of the wart, to cook the virus dead, while simultaneously cutting off the blood to the warts altogether. Too many lasers on the market make use of ineffective wavelengths, which either build up heat on the surface without penetrating to the actual blood supply feeding the wart, or simply fail to create enough heat to get the job done. Which takes us to the next point.

Second, the proper Nd:YAG laser for wart treatments needs to be a true long-pulse laser. The pulses of laser energy being delivered need to pour in at a slow enough pace to fully heat the blood supply being targeted. This longer pulse duration (also known as pulse width) allows for full-volume heating of the blood at the base of the wart. Too many of the lasers being used today have very short pulses (typically as short as 0.1 to 1.0 milliseconds), which as a result can be thought of as doing nothing more than splashing little bits of energy without building up the kinds of real heat required to kill off a wart. A true long-pulse laser effective at this treatment will make use of a pulse duration (or pulse width) of at least 25 to 45 milliseconds. That is how you pack the punch you need to knock out a wart.
Now, if you are going to take on warts, therefore, you need an Nd:YAG at the 1064nm wavelength, and it needs to be a true long-pulse laser, capable of pulse widths of at least 25 milliseconds.

And that is precisely the kind of laser foot treatment we have here at our office.

Our laser can deliver the right kind of energy, across the perfect wavelength, at the right penetration, with the duration needed to destroy warts — usually in only one treatment. (Sometimes, in severe cases, requiring two treatments.) You shouldn’t be afraid of the procedure, but you should know going in that you will definitely feel a few zings. You will feel the zings because of the heat being generated and the sensitivity of the wart itself, but the whole treatment is really quick, and when you have been suffering with warts for a long while, there is something deeply satisfying in knowing that those zings are blasting that wart to oblivion and cutting off its supply of blood.

In the days following the treatment, you may at worst feel a little bruising if you apply much pressure to where the wart was located on your foot, but that’s about all. The wart, now dead, will often simply slough off like a callous.

Where warts used to be a frustrating problem that could linger for years, despite all efforts to get rid of them, now, equipped with the exact laser for the job, we can ensure that your warts are destroyed in one or two quick treatments at our office, all without medications or anesthetic.